Za’atar has an intricate, slightly convoluted history thanks in part to the secrecy Middle Eastern families kept regarding their recipes. Its exact composition varies amongst eras, regions, languages and classifications. For starters, the word can actually refer to a singular herb—a wild oregano species—and a spice blend. The mixture is typically comprised of the herb and some combination of toasted sesame seeds, sumac, salt, oregano, basil thyme, thyme and savory.

“Modern” za’atar has long been a staple in Arab cuisine and even began to garner a reputation as a medicinal remedy around the 12th century. With such a storied history, it’s nice to know that za’atar is still a hit today. It doesn’t take long to find a food blog fawning over its transcendent taste.

Tale of the Taste: The Herb vs. The Blend

The herb has its fair share of pseudonyms: Middle Eastern or Syrian Oregano, biblical hyssop, and the scientific names Origanum Syriacum as well as Majorna Syriaca. The actual taste is very similar, unsurprisingly, to thyme or oregano.

The blend, as mentioned, generally consists toasted sesame seeds, sumac, salt, oregano, basil thyme, thyme and savory. Other variations will toss in hyssop, dried citrus zest and other dried herbs like dill. Why the variety? Some blends follow secret family recipes. Regionally, some locations put their own twist on the blend. Inconsistency, in a way, is its beauty.

Our za’atar blend captures the earthy, herbal and tangy notes in a simplified mixture with some of the best regional ingredients. Combining toasted sesame seeds, sea salt, hyssop, savory and sumac, the RawSpiceBar’s Za’atar blend can accompany all kinds of meats, seafood, vegetables, breads, even yogurt. We like it particularly well with shrimp, especially when it's grilled on a skewer and served on this delicious salad. 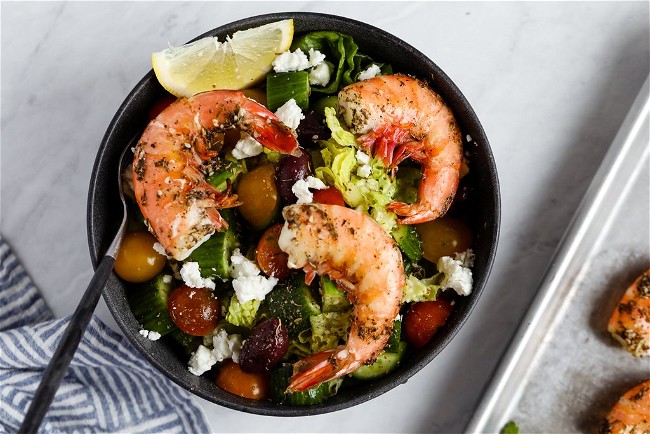 More from: recipe-healthy salad shrimp skewers zaatar
Back to Recipes