You’re no stranger to rotisserie. It’s a common sight at the grocery, but it’s always a welcome sight…and smell. You’re drawn to its mouthwatering scent and its methodical, mesmerizing turns along a horizontal skewer. Even though it’s almost always chicken, it’s nearly impossible to resist the temptation of the fragrant fowl.

Now, imagine you’re wandering the bustling streets of Beirut. First you smell it, notes of turmeric, cardamom and cumin mingling with luscious lamb. Mmmm. Then you see it; a familiar image, turned completely on its side. Rotating upright on a vertical rotisserie (wait, you’re allowed to do this?), a succulent slab of juicy meat is thinly shaved by a street vendor. Your senses take over. You. Must. Have. Some.

This is shawarma, one of the world’s preeminent street foods. Tracing its roots back to 19th-century Ottoman Empire, in what is now Turkey, the shawarma technique involves stacking seasoned and marinated meat on a vertical rotisserie or spit and cutting off thin slices from the roasting outer layer. This method bucks the tradition of the horizontal spit, which has been mankind’s go-to preparation of meat since early civilization. Sometimes innovation takes a few thousand years.

Shawarma isn’t defined by one meat as, say, our  is uniquely tied to pork. Instead, it’s commonly served in lamb, mutton, veal, beef, chicken or turkey varieties. The collection of spices is a flavorful combination that transports your tastebuds to the Middle East. RawSpiceBar’s Shawarma Spice Blend brings together turmeric, coriander seeds, cumin seeds, fenugreek seeds, cassia, green cardamom, black peppercorns and red chiles to replicate the region’s authentic flavors.

The shawarma method takes on a different moniker in different parts of the world. In Turkey, the technique’s birthplace, it’s referred to as döner kebab. In Greece, it’s the gyro. In Mexico, it’s known as al pastor. Shawarma is the prominent classification in the Middle East, however its preparation and accompaniments can vary by country. In Israel, for example, most shawarma is made with dark meat turkey and is served with tahini, hummus and pickled mango slices.

Nowadays, shawarma is a wildly popular Arabic street food that can be found in countless corners of the globe. There are a few ways to serve it, but our failproof favorite is wrapped up in pita, a leavened flatbread common in the Mediterranean and Middle East.

You probably can’t take to the streets and start slinging out shawarma—if you can, more power to you— but using our Shawarma Spice Blend in this recipe is the next best place to start.

Salt and pepper to taste 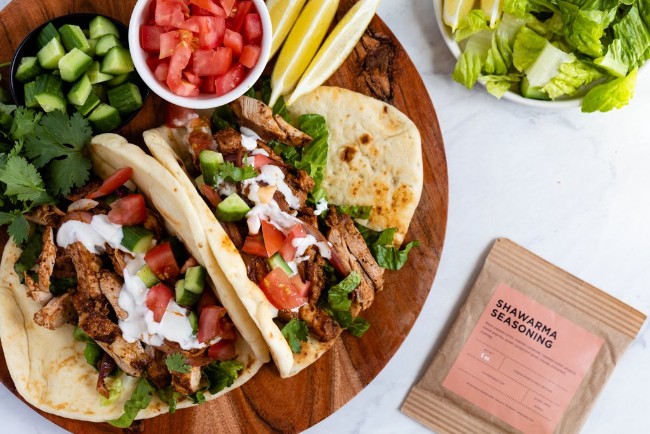